THE FORMAL BASIS OF MODERN ARCHITECTURE

Two contemporary English critics have put forward certain ideas on the theory of modern architecture. By doing so they have raised between them the problem of form in architecture and provided the bases for taking it to a subsequent phase.

In a lecture at the Royal Institute of British Architects in May 1961, Sir John Summerson suggests two possible ways of resolving our problems, one of which concerns the notion of fundamental solids as the basis of form in architecture. Summerson begins as follows : “Imagine just for a moment the task of isolating by characteristics the modern forms from the globality of buildings”. Then he goes on to say that “on this principle of geometric absoluteness, it is possible to construct systems or disciplines that allow the architect to be guided toward that order of the form that he must reach”.

In contrast, Reyner Banham, in his book Theory and Design of the First Machine Age, would seem to deny the possibility of establishing any principle that is based on considerations on form, and discusses the validity of the Corbusierian equation on the norms of Phileban solids with the principles that govern the universe.

In this article I am not attempting to isolate « modern » forms, nor to propose a joint system for criticism and project work. I will restrict myself to presenting some ideas that may help clarify the relationships that form has in all architectures. One of my theses will be to affirm that formal considerations are fundamental to any architecture, irrespective of the style, and that these by themselves can help us develop a language agreed upon both for criticism and for project work, the detailed nature of which, its grammar and its syntax, will not be considered for reasons of space. My observations proceed by prolegomena ; they do not fill the evident void in contemporary architectural thought, but they will at least serve to denote its existence. Initially the essence of every creative act can be thought of as communication of an original idea of the author to the person who receives it via an expressive means. And the expressive means must be such as to transmit the original intention as clearly and completely as possible to the person who receives it. This need for clarity and comprehensibility, much requested by Gestalt psychologists, is crucial for the development of any means of communication. Elements such as scale, harmony, model, etc. should first be conceived as useful elements with regard to the comprehensibility of expression. Formal order, therefore, cannot be considered as an end in itself, but as useful for clarification purposes.

Architecture can be linked to various elements to transmit its total meaning and to produce the final result, that is to say, a building, a group of buildings or a total environment. All these elements contribute to defining the architectural equation, and I will define them as concept, or intention, function, structure, technique, form. It will be obvious, I think, as soon as we come to examine them, that they are not of equal importance or scope. From some passages by Choisy, it would seem that architecture should be divulged by technicians. Other theorists of the 19th century, including Louis Sullivan, would have claimed that architecture is in the first instance the manifestation of function. The first modern theorists have been typically inclined toward a sociological and historicist position, as emerges from their talking of architecture as an expression of “the spirit of the age” or “the will of the age”, thus preferring the element of the intention. Yet what none of these theorists has attempted has been to define exactly what the term they use means, and to what point form is useful or dominant among the elements listed. This partial ordering cannot by itself provide a rational discipline for architecture, and it becomes dangerous when it is used in a volitive or capricious way in the project process. The uncoordinated or nonrational invoking of this or that other element is one of the first causes of the architectural confusion that we are often faced with.

Not that the problem is easily resolvable ; for example, the indications of form are not always totally reconcilable with the requirements of function ; and also, a function that appears as symbolic to one particular culture may seem utilitarian to another. This does not imply that the elements named are by their very nature antagonistic, but rather that, when they are weighed equally, their identities are lost so that the effect of the building from which they result is inevitably invalidated. Consequently, conceiving a rational hierarchy of elements ends up being a necessary precondition for the solution, and effectively even for a clear formulation of an architectural problem. Such a hierarchy could derive from both the general and the particular requirement set by the problem. In other words, in architecture we must establish a basic priority to evolve from the dialectic between relative and absolute finalities. Such a proposal is of crucial importance today, since our social, economic and technological environment has been so dilated as to ensure that no single individual can perceive any type of order in it. Furthermore, the proliferation of new technological instruments has evolved beyond any capacity that architects may have to use their potentiality rationally. In this situation, architecture seems to take refuge in mannerism and in the cult of selfexpressiveness, in a compulsive emphasis on isolated creation without any total order. This need for an individual expressiveness is legitimate, but if it must be satisfied without any prejudice to the comprehensibility of the environment conceived as total, it is necessary to propose a system of general priorities and it will be shown here that this system must necessarily prefer absolute to temporal finalities.

If we suppose the general situation, that is, the total external order, as our absolute order, then it follows that a specific situation, by its very nature, restricts us within relative finalities. This is equivalent to stating that we currently see the individual building as a relative goal in relation to its environment. The individual building cannot be seen as an isolated entity, as an end in itself, but simply as an element of transition in the completion of the whole, It can still take on a condition of « ideality » that is integral in itself, but only within the limits imposed by the envisaged future order.

In pragmatic terms, it is clearly impossible to create a specific building with a finality or an absolute end in sight, because every new unit will not only modify the existing model, but will also modify with its presence every future model that results from the addition of other units. In considering a building, for example, we cannot locate its entrances where no means of access exists to material time. To this end, every building must recognize the existence of external models, inasmuch as these could be considered as parts of a future absolute order. To complicate this problem still further, any future order cannot be a static or constant entity, but must be conceived as continuous and capable of accepting growth and mutations. Any notion of future order, in strictly static terms, would be criticized as romantic and utopian. The designs of Sant’EIia for a “new city” are significant examples of this type of visionary approach. For Sant’Elia futurist notions of energy and speed were absolutes for which he sought an architectural expression. But in doing so, he involved himself in an essential contradiction, since the buildings he designed, being necessarily specific and relative, could only presuppose a relative and mutable future condition. He imposed aerodynamic and tapered aesthetics on these designs, making them symbolic of the futurist utopia. Irrespective of how much the effect of these images could be stimulating, they are of no help to any realistic reflection on the problem of the future continuous model, nor to a rational approach that must spread a total order, or, in the terms I have used, to an absolute that is capable of including change and growth, yet conserving its own absoluteness. It is the concept of the priority of absolute ends that is critical here, since alone it can provide us with the basis for a hierarchical order of the five elements. This major task must now be attempted. It is my thesis that architecture is essentially giving form (itself an element) to intent, function, structure and technics, and in stating this I raise form to a position of primacy in the hierarchy of elements. 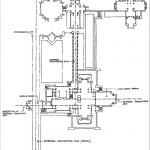 SITELESS IDEAS COMPETITION
1996
“The virtual is opposed not to the real but to the actual. The virtual is fully real insofar as it is virtual.”
G. DELEUZE, DIFFERENCE AND REPETITION
In an abstraction of the existing spatial concept of House IV, two cubes are posed side by side to form a field for potential interconnectivity, upon which an abstract machine initiates a differentiating process. This spatio-temporal process of transformation leads to the actualization of the virtual through time and opens architecture to its own indeterminacy. Form is then reread as a manifestation of becoming, rather than a representation of function and meaning. The process of becoming changes the object in space and time, breaking any direct correspondence between real elements and their representation.
The program for the Virtual House begins from the memory of the spatial concept of Peter Eisenman’s House IV, for which he wrote an unpublished text in 1987 titled The Virtual House. Here the Virtual House is abstracted into cubes that constitute a potential field of internal relations and conditions of interconnectivity. Each potential connection can be expressed as a vector. Each vector has a field of influence that actualizes its virtual movement through time. This actualization is visualized through the effect of each vector on the lines within its field of influence The lines and their geometric properties become forces. For each vector, attributes were set arbitrarily in order to describe its field of influence. The movements and interrelations were produced by these attributes, which are now seen as constraints that influence the location, orientation, direction, and repetition of any vector within the space. These constraints operate on each other as local forces. Each constraint acts and reacts according to three types of fields of influence – points, orientation, and direction. The condition of each vector is recorded, whether unconstrained or constrained, as a series of traces.
Deleuze writes in Difference and Repetition, “For a potential virtual object to be actualized is to create divergent lines which correspond to – without resembling – a virtual multiplicity”. In the Virtual House, the virtual multiplicity is the changing memory of the two cubes, changes due to differences in their interrelations in time.
In addition to rethinking form, in this process the virtual characteristics of simultaneous activating and manifesting point toward an understanding of multiplicity and establish « real » distinctions between the given parts of a whole. One can no longer reduce complexity to simplicity. Contrary to the Cartesian notion of completion, the idea of incompletion is now operative. The continuous desire to realize the virtual generates new possibilities and alludes to another understanding of interrelations and repetitions.
Using the notion of the virtual in making architecture runs the risk of simply and literally materializing the immaterial. Hence one needs to address the productive making of architecture, that is, the condition of the virtual, in order to allow architecture to question traditional judgment. This allows for another working of space that affects both subject and object as architecture continues to become.
http://www.boeldieu.com/leonard/Observation/Observation/PAROLES%20D’ARCHITECTES/08005912-13CB-4FB6-9D68-C71B42DA2414.html